Olympic Plates come in various forms from standard to rubber-coated bumper plates, and some even come with built-in handles for ease of loading and unloading.

Filling your home gym with plates can be expensive, but they can last forever, yes really the paint might wear off, and they might go rusty, but a 20-kilo plate will always weigh 20 kilos (or thereabouts), and when it comes to design you will be hard-pressed to beat the original design that has been around for decades. Why? Because the original design is a solid circle of iron with a 2-inch hole in it, simply indestructible! 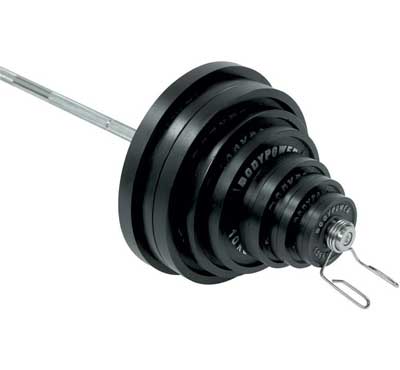 Rubber bumper plates can wear out eventually although they do have their advantages, the handled Olympic plates or tri grips are handy and safer (as you’re less likely to drop them). Still, the strength of the plate has been compromised by making space close to the edges, and there have been reports of them breaking.

The original style designs are also generally cheaper than rubber and handled Olympic weights. The Body Power Cast Iron Olympic Discs are an original no-nonsense design, a classic. They are solid cast iron, finished in black with the weights in kilos and pounds cast into the side. They come in sizes

There’s not a lot else to say about the plates except that THEY WILL last you forever and are an investment as they do generally go up in price over time and hold a good price in the second-hand market. I have seen people actually buy plates and sell them a few years later for more than they paid for them, which is good to know in case you ever choose to sell them and join a gym.

You can buy the plates in pairs or as a set complete with a 7 foot Olympic Bar. The Olympic Weight Set is probably the route you will go down if your just getting started with a home gym.

The Body Power bars are ok and will last a while, but as you get stronger, you will likely want a stronger rated bar. If you end up buying a more expensive stronger bar, the standard Body Power Bar is always good for things like Chins, T Bar rows, Meadows rows etc. If you’re in the process of starting a home gym and want to start with an expensive bar, I would recommend a standard bar also as you don’t really want to be using an expensive bar in situations where it might get bent slightly (Chins, T-Bars etc.)

The Body Power Olympic bar is a standard 7ft long with 2 inch ends, chrome coated and rated up to loads of 320 kg. The standard spring collars that come with the bar are perfect and will last a long time (mine have)

Body Power Olympic Sets are available in 145kg, 185kg and 235kg you can also buy a 155kg set that comes with a pair of Olympic Dumbell handles.